If you ask any housing developer about his ideas and goals, you will basically get the same answer throughout Europe: one-room apartments, two-room apartments, three-room apartments, four-room apartments: Only the percentages vary. Visionary ideas for living together are not included. The apartment itself has been largely standardised in Europe since modern times. The sizes of the individual apartment types as well as the floor plan.

But what can the home contribute to the further development of our society? Every apartment is a propaganda machine for a way of life. Are we really so equal that we want the same dwellings? Or are we so equal because we live in the same flats? Is that what we want? Is there another way? Then what does the city look like? Do we want to content ourselves with the typologies of the Gründerzeit?

The elastic apartment was developed in 2016 as a residential building with 200 units for the degewo for a specific location in Berlin. The project was stopped by the Senate without giving reasons. 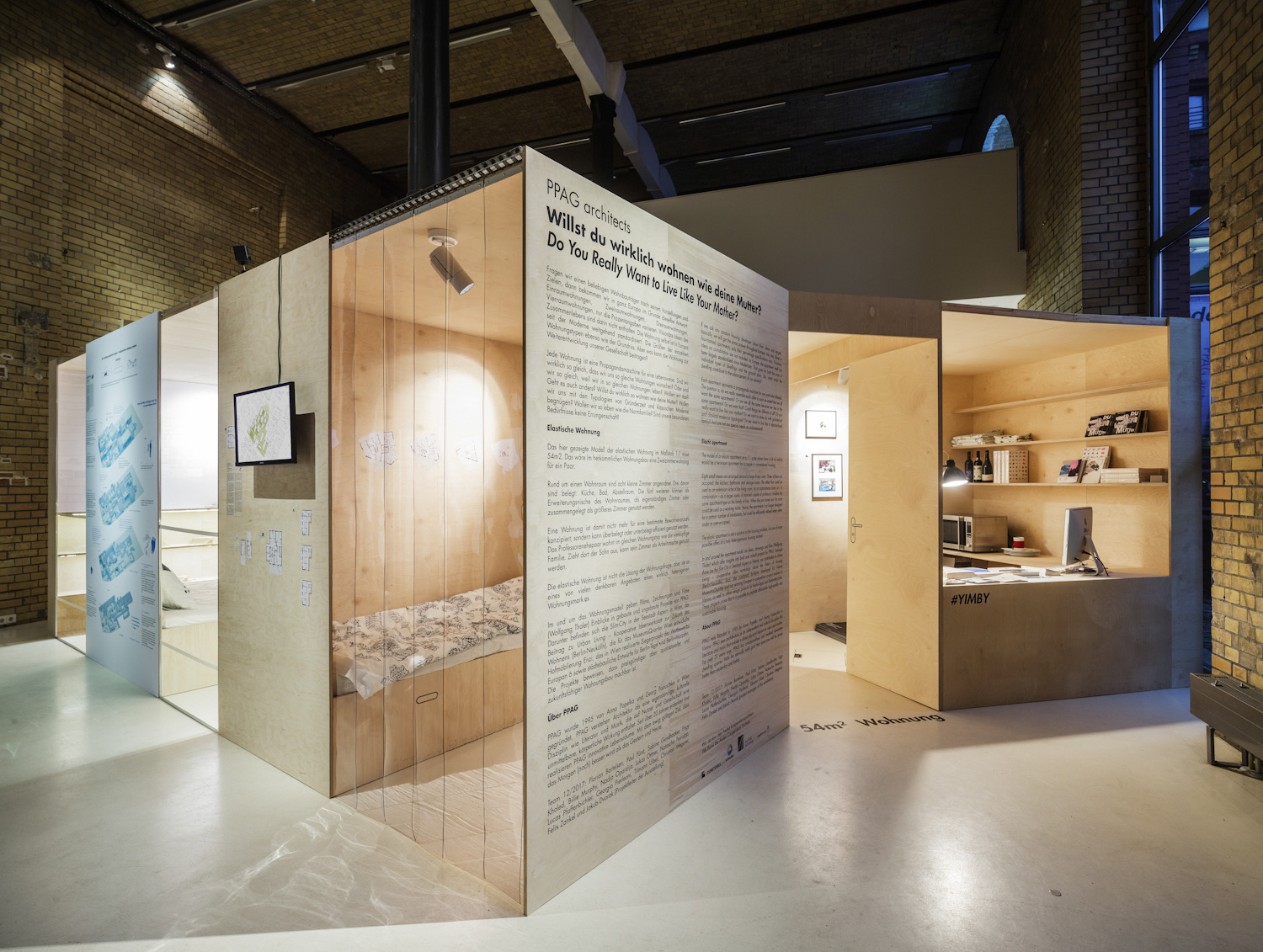 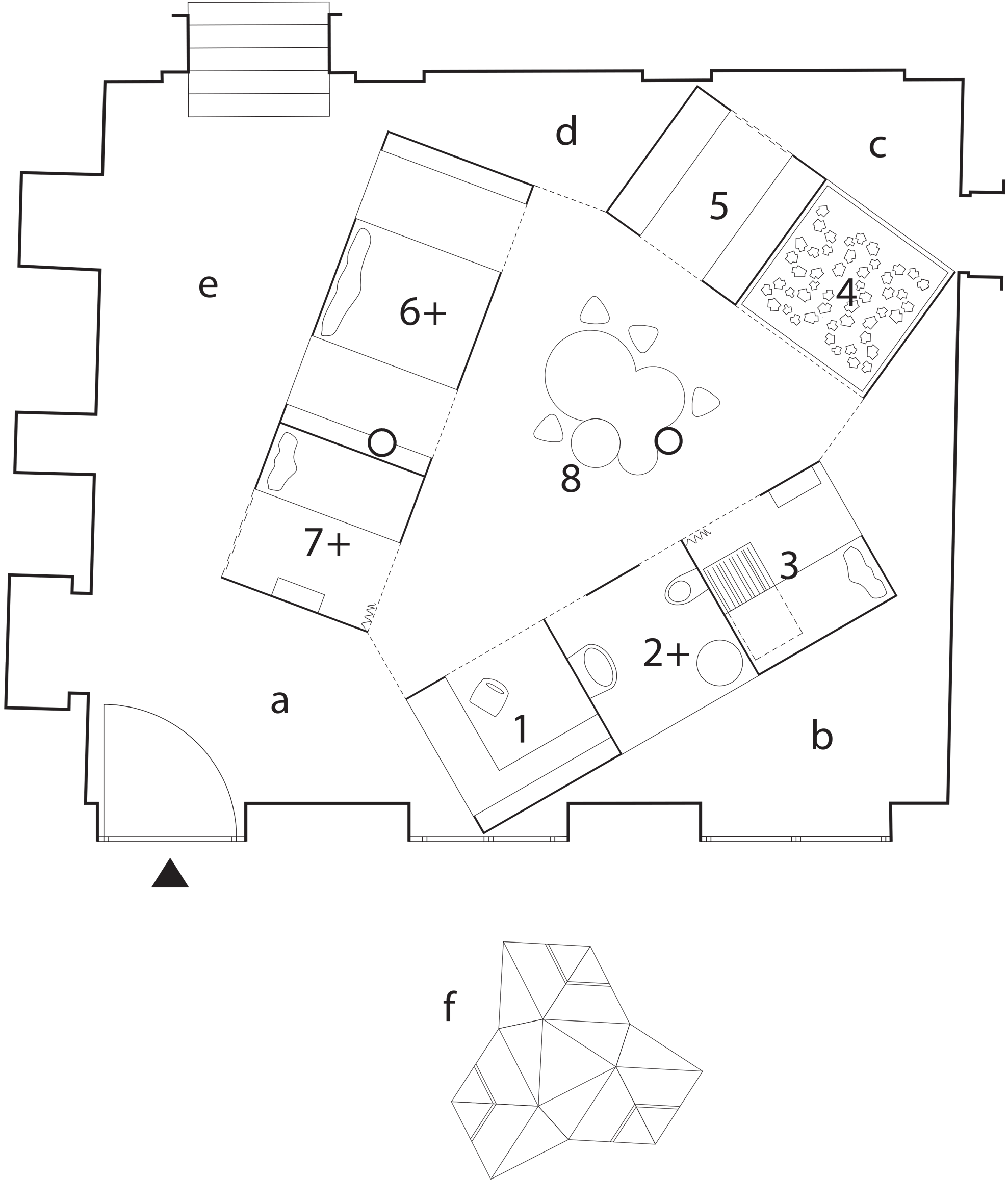 The standard two-room apartment usually has about 54 square meters and is shared between 1-2 persons. The concept of the “elastic apartment”, which was exhibited in the AEDES Architekturforum in Berlin, is very special: smaller rooms are arranged around a large, shared room. The small rooms are flexible and offer space for several people, depending on the living situation and needs of the residents. The “elastic apartment” thus offers space for a family with two children as well as for a shared flat or a single father whose children only live with him on weekends.

This exhibition is a plea for progress in architecture, housing and urban design. Our way of living has nothing to do with our genes, it is rather acquired behaviour that has been passed on over generations, and any further development is prevented by the durability of the houses in which we live.

“Even if decision-makers often reduce the question of urban housing to conventional standards, it is nonetheless becoming increasingly more complex and demanding. Internationally active, Vienna-based PPAG architectural practice is one of the few protagonists to accept that challenge with all its consequences. Although their approach may not necessarily be apparent to the onlooker at first, PPAG show us unconventional, yet ever coherent and trendsetting possibilities of thinking living, housing an city.

In its wealth, the exhibition gives us an insight into the architect’s complex oeuvre: realised and unrealised, their proposals range from the smallest scale to urban design concepts. Undogmatic, owing to the quantity alone. An open offer to pluralistic society. Alongside the methodical relationship between those outwardly very different projects, there is one thing, above all, they have in common: ethics, a perceptible attitude, philanthropy.

According to PPAG, this exhibition is a kind of wake-up call to leave the trodden path and discover new terrain. Inspring for architects, property developers and other responsible parties as well as everyone else involved.

Dive into PPAG’s universe – it is well worth it!” 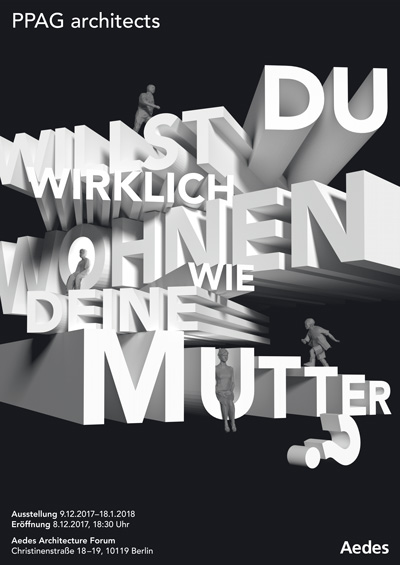 The exhibition catalogue presents the key project of that plea, the Berlin Wiesenschlag project with it’s “elastic apartment”, whose life-size model is also exhibited. In truth, the catalogue is an interim publication with which we hope to bridge the gap between our book “Speaking Architecture” (ISBN 978-3-99043-637-0) and its successor.

Hence, it also contains several projects, realised in the last years, which are not included in the exhibition. The Slim City project in Seestadt Aspern, Vienna, a quarter that operates with a kind of hedonistic, communicative density, the educational campus Sonnwendviertel in Vienna, prototype for a series of Viennese educational buildings that meet state-of-the-art educational requirements, the Steirereck restaurant in Vienna’s Stadtpark, where top-notch kitchen and service standards meet superior athmospheric commitment to architecture … and the mixed use Pah-Cej-Kah building at the railway station in Deutsch-Wagram, where eateries, offices and other commercially used spaces form a kind of stepped pyramid, with a park on the top for everyone. 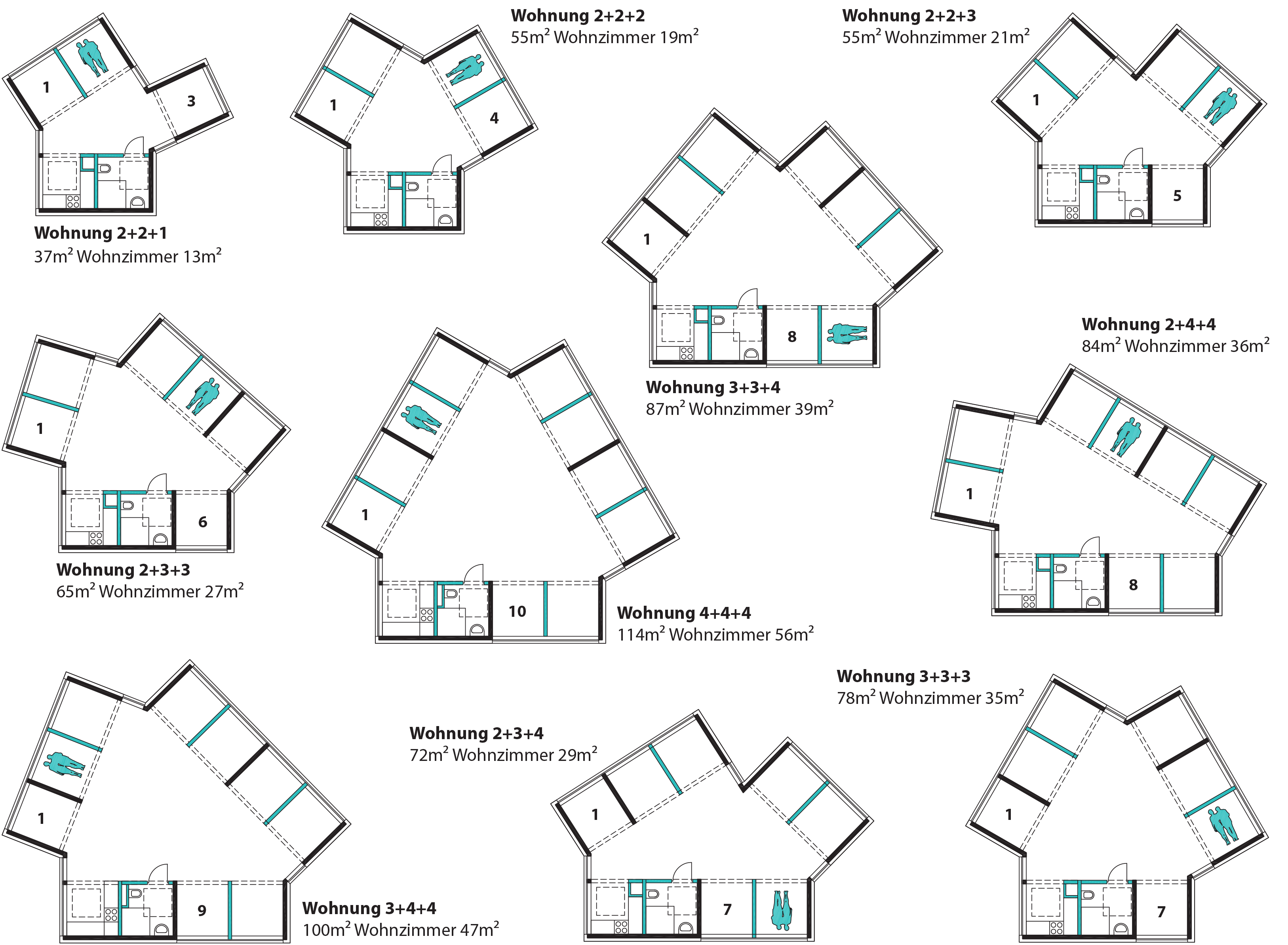 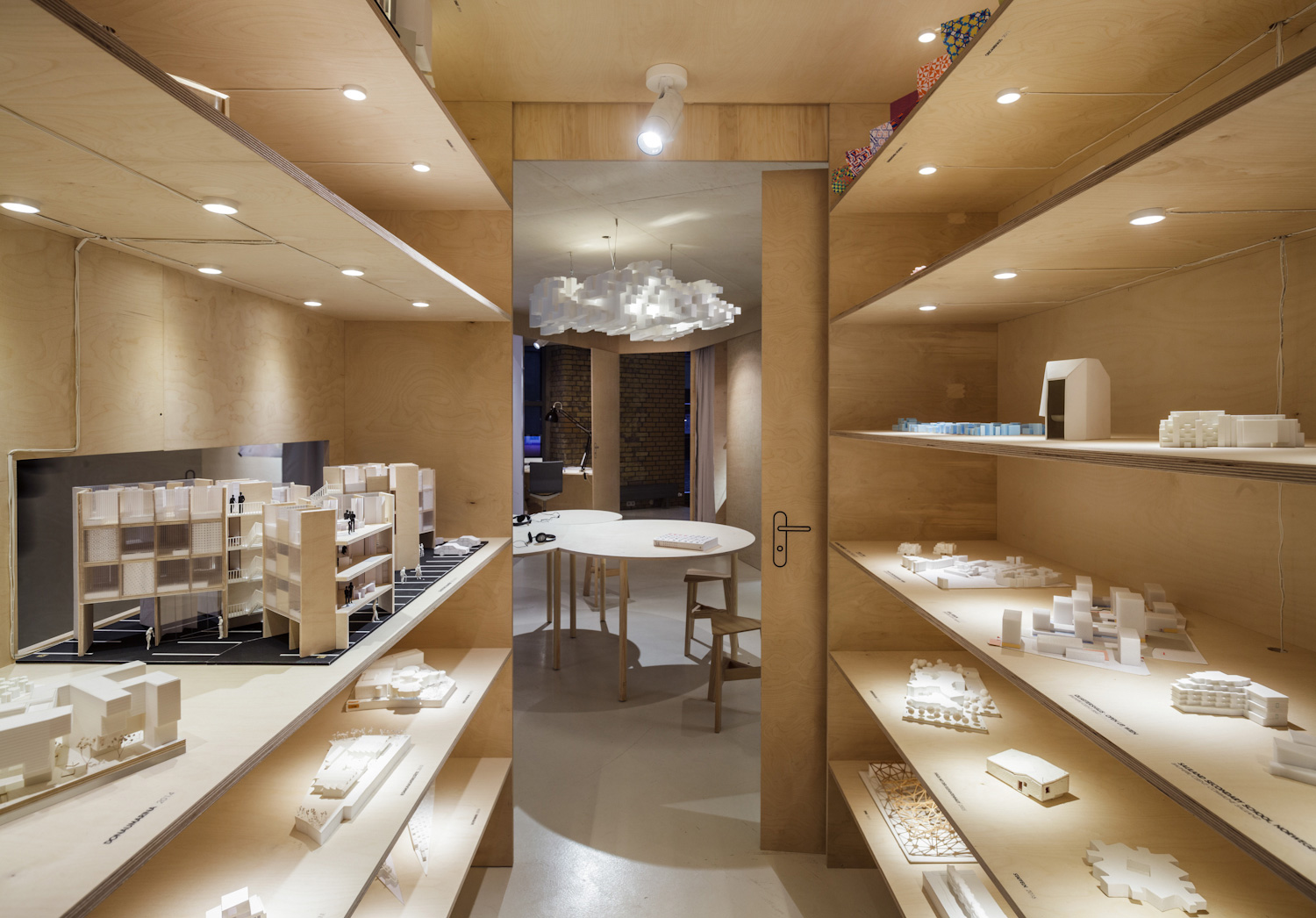 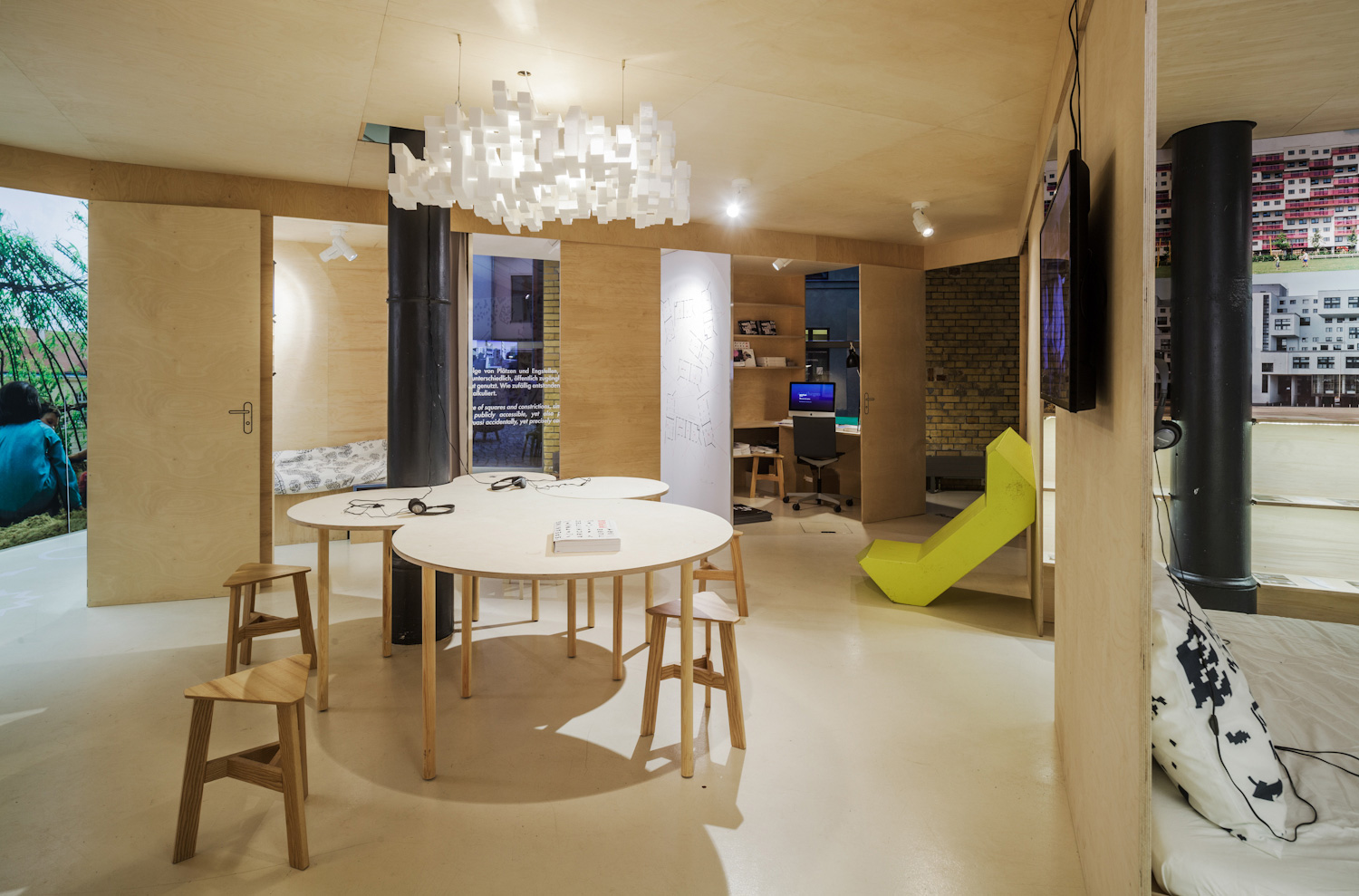